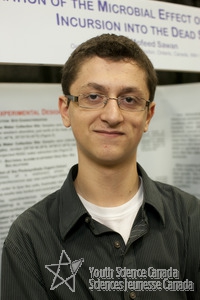 With the Dead Sea shrinking by 1 meter per year, connecting it to the Red Sea has been the most favoured solution. Research has shown that the Dead Sea is capable of holding life when diluted with freshwater. The focus of this project is to examine whether bacteria may be able to adapt to this new environment and which bacterium would be the most dominant.

Mofeed Sawan is a grade 11 student from Oakridge Secondary School, London, Ontario. Mofeed has participated in a wide variety of clubs and teams. He is currently the Build Captain and driver of his school’s FIRST Robotics team. After winning the prestigious Rookie All-Star Award, he along with his team qualified for the International Competition in St. Louis, Missouri. Mofeed is also a member of his school’s cross-country team, with his team they had won silver at WOSSA and they had the opportunity to compete at OFSAA 2009. Furthermore, Mofeed has in various ways engaged with his community. He is also heading his Robotics team’s mentorship initiative where he is helping form two FLL teams (elementary schools) and another FRC team. Mofeed volunteers at his local community, especially at the London Health Science Centre and the London Public Library. He is also the winner of the 2007 and 2008 Intermediate Math Challenge along with the 2008 Lawson Literary Essay award. Mofeed aspires to pursue a career in either research or engineering. This is Mofeed’s first time participating in the CWSF, and so far it has been evolving into a life-long memory!