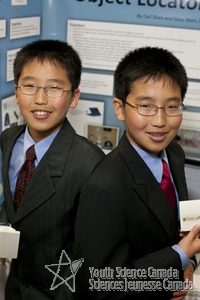 Gary – Gary Shen, 13, born in Calgary, Alberta. He moved to London, Ontario with his family at age one. He has been involved in the London District Science and Technology Fair for four years. This is his first time attending the Canada Wide Science Fair. He is involved in many sports. He plays competitive hockey and has been team captain for several seasons. He has also won many individual and team awards. In school he is involved in playing clarinet in band, wrestling, cross country, and basketball. Out of school he plays soccer, hockey, badminton and tennis. He has also been playing piano for about 4 years. He loves reading novels in his spare time. As well he loves to travel with family. His ambition is to become a respectful citizen that has some good impact on the world. Other than that he has not planned to be anything.
Carl – Carl Shen, 13, was born in Calgary. He has been involved in many sports and has been playing competitive hockey since 8 years old. His hockey team, the North London Nationals has gone undefeated in previous seasons and has won one Alliance Championship. He has been assistant captain of his team for the past three years. Other sports that Carl plays include tennis, basketball and badminton. He has been competing at the London District Science and Technology Fair for 4 years. He has participated in the PIR Essay Contest for 3 years, placing third once. Carl has played piano for over 4 years and is currently studying for Grade 6 Repertoire and Grade 1 Theory. Carl has also been playing the clarinet for his school band for 2 years. Carl intends to study in an engineering field for post-secondary education.