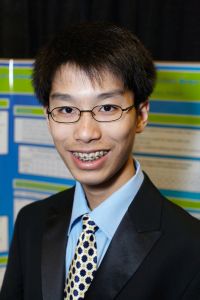 The Alberta Infant Motor Scale is a measure of infant motor abilities developed 18 years ago in Canada. Due to “Back to Sleep” campaigns and ethnic diversity, the order and age of acquisition of AIMS rolling items may have changed. 465 infants recruited across Canada were assessed. It was found that the order and age of emergence of the rolling items still remains the same.

Young Zhou is a grade 11 student who attends London Central Secondary School. At school, he is a member of the Badminton team, Chess club, and Reach for the Top team. Young enjoys playing piano, chess, and swimming. He has completed his RCM Grade 10 piano exam with First Class Honours and won the Senior Piano Trophy in the Kiwanis Music Festival of London in 2010. He won First Place in the Grade by Grade Chess Tournament in Grade 8 and has won numerous prizes in high school team chess tournaments. Young has also completed Bronze Cross in swimming and hopes to become a lifeguard one day. Young is very interested in mathematics. He has participated in math contests every year since elementary school and won first place in the 2012 Canadian Team Mathematics Competition with the top score for both the Individual and Team sections. Young is actively involved in the community as he volunteers weekly at Chateau Gardens London. In academics, Young won First Prize in the Pathways to Discovery Essay Contest in 2007, 2009, and 2011. He is interested in medical science and hopes to pursue a career in medicine.