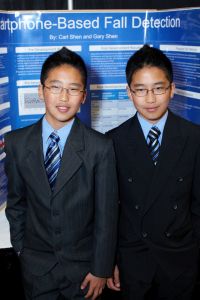 Carl – Carl Shen, 14, was born in Calgary. He has been involved in many sports and has been playing competitive hockey for 8 years. His hockey team, the North London Nationals has gone undefeated in previous seasons and has won one Alliance Championship. He has been assistant captain of his team for the past three years. He has been competing at the London District Science and Technology Fair for 5 years. He has participated in the PIR Essay Contest for 3 years, placing third once. Carl has played piano for over 5 years and is currently studying for Grade 7 Repertoire and Grade 1 Theory. Carl has also been playing the clarinet for his school band for 3 years. Carl intends to study in an engineering field for post-secondary education. Carl partnered with his brother for their science fair project. Their project, about a method of fall detection was inspired by his 76 year old grand-mother. Him and his family were always worrying about the possibility of a fall. Further investigations include the possibility of integrating other fall signals for their application. Students wishing to do a project should draw inspiration from anything and plan and carry out a project.

Gary – Gary Shen, 14, born in Calgary, Alberta. He moved to London, Ontario with his family at age one. He has been involved in the London District Science and Technology Fair for five years. This is his second time attending the Canada Wide Science Fair. He is involved in many sports. He plays competitive hockey and has been team captain for several seasons. For his project he partnered with his twin brother Carl and his inspiration was his Grandma who would always go on walks but was afraid she would slip and hurt herself. After conducting his project he will further develop his application and release it on the Google Play Market.