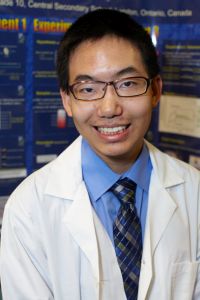 A targeted drug delivery system against cancer was developed using gold nanoparticles. The optimal amount of medicine to be loaded onto each gold nanoparticle to prevent degradation was determined using a model protein (BSA). Gelatine microspheres were proven to be a potential carrier for gold nanoparticles for sustained drug release that could eventually eliminate treatment-free periods between dosages to reduce cancer cell proliferation.

I’m a grade 10 student at Central Secondary School and I live in London, Ontario, Canada. My hobbies are swimming and chess and my favorite subjects are math, science, computer science and law. I’m a member of several clubs in my school and was the co-captain of the robotics team. I volunteer at a computer programming camp during the summer and I volunteer at a seniors home every other week. I received two bronze medals from the Canada Wide Science Fair. Last year, I was a member of my school team (three people) that was the national champion of the Pascal mathematics contest. I hope to become an engineer in the future. I was inspired to do my project after my grandfather recently died from cancer. I realized that the staggering number of fatalities caused by cancer per year (7.6 million) had to change. A future investigation could possibly involve utilizing other sustained-release drug delivery carriers apart from gelatine microspheres (investigated in my project), such as porous calcium hydroxyapatite ceramic. I would advise students thinking about doing a project to choose a topic that reflects their interests because science fair should be fun, not a chore!