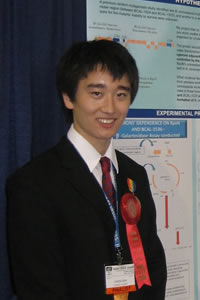 This project investigates Burkholderia cenocepacia (B. cenocepacia), an opportunistic pathogen dangerous to people with compromised immune systems, particularly cystic fibrosis patients; its virulence factors are not understood. A previous paper showed two interesting B. cenocepacia mutants unable to survive in vivo (among others), so my project here tries to answer the questions of why the two mutants were unable to survive in vivo and why the mutated gene regions themselves (one, in a promoter region located between operons BCAL-1524 and BCAL-1525; the other, in a region encoding a transcriptional activator) were important for virulence.

A B-Galactosidase Assay I conducted revealed the two operons BCAL-1524 and BCAL-1525 to be controlled by RpoN, an alternative sigma factor important for B. cenocepacia virulence. A Motility Assay I conducted revealed the two operons BCAL-1524 and 1525 to be crucial for B. cenocepacia motility. This study, then, is the first in which genes controlled by RpoN in B. cenocepacia have been characterized. It is an important starting point in eventually understanding the RpoN regulon in B. cenocepacia. Motility is a proven crucial virulence factor in B. cenocepacia –the results of my Motility Assay help explain why the mutated promoter gene in the previous paper had been unable to survive in vivo, and further elucidate the possible roles the crucial RpoN Regulon plays in B. cenocepacia pathogenicity. The results of my study suggest that developing an antimicrobial agent to target the specific proteins of the genes studied here, may be a novel and practical idea in helping cystic fibrosis patients combat B. cenocepacia.