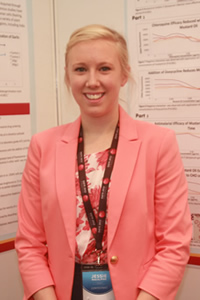 Half of the global population is susceptible to malarial infection, with over one million annual deaths occurring as a result of the disease. Plasmodium, the causative agent of malaria, contains a vital plastid-organelle homologous to the chloroplasts of plants, known as the apicoplast. It was determined in previous studies that allyl isothiocyanate (AITC) is able to inhibit plant growth in a variety of species through effects on photosynthetic function. The purpose of this experiment was thus to examine the antimalarial properties of mustard oil, a natural form of AITC used as cooking oil in developing countries. A one-step fluorescence assay used for antimalarial drug screening was employed throughout the experiment; resulting in the discovery that a 2µg/mL solution of pure mustard oil is able to significantly reduce Plasmodium falciparum infection in human red blood cells. Results of an MTT assay and light microscopy indicate that mustard oil exhibits equivalent mammalian toxicity to the common antimalarial drug Doxycycline. AITC is currently sold as an antibiotic, where clinical studies indicate that oral administration results in 90% absorption and rapid urinary drug recovery. With no organic solvent necessary, pure mustard oil (purchased from a local grocery) inhibits over 94% of parasite growth. Thus, the necessary dose of 10mg has potential to be taken orally, a treatment costing one million times less than the next leading antimalarial. Mustard oil production already occurs in malaria-endemic regions; including Brazil and India, making this cooking oil an inexpensive, accessible and effective alternative to current treatments.