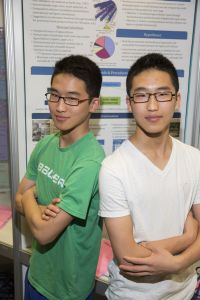 This project focused on developing a process to convert lignocellulosic municipal waste to higher value biomaterials. Two stages were explored and evaluated based on product purity and yields: the fractionation of lignocellulose to cellulose and lignin, and the conversion of these components to commercially valuable biomaterials. The investigated methods generated successful yields, with high purity and varying effects of conditions on product yields.

Gary Shen is a 15 year old grade 11 student attending AB Lucas Secondary School in London, Ontario. He wishes to attend a Canadian University. Gary’s interests include playing hockey on both his school team and with a club as well as travelling with family and/or friends. Gary has participated in regional and national science fairs in the past. Gary’s advice for students considering a science fair project is to do a project every year and to improve in some aspect every year. Gary’s twin brother and himself developed a project to explore the potential of producing value-added products from waste through chemical processes.

Carl Shen is 15 years old, and is in grade 11 at A.B. Lucas secondary school in London, Ontario. He plans to attend University, pursuing a degree in a scientific field. He has had numerous awards and achievements at science fair and DECA competitions. Carl’s enjoys playing hockey, and is a member of his school hockey team as well as with a club. Other interests include watching movies and reading. Carl has been involved in science fairs (mainly regionally) for 8 years, and has enjoyed his various experiences immensely. His advice for students thinking about doing a project is to choose an enjoyable topic, and to commit to completing it before starting. Carl and his brother developed their project idea based on the idea of using waste or everyday trash to produce something valuable.