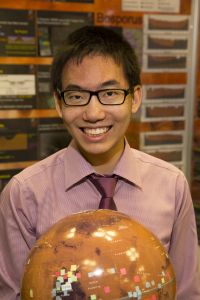 My project investigated a new, unique technique for determining the geology of Mars tens of kilometers underground. Using NASA satellite data and HiRISE images, I conducted a rigorous study of 1100 impact craters on Mars as natural “windows” into the ground. I created 22 accurate geologic models for 8 significant regions on Mars, which could potentially improve our understanding of Mars’ past climate and habitability.

I’m a grade 12 student at Central Secondary School and I live in London, Ontario. In my spare time, I enjoy swimming and playing chess. I love science and technology, and am the captain of my school’s Science Olympics team and member of FIRST robotics. I also enjoy volunteering in my community; during the school year, I volunteer at a local concert hall, and during the summer, I volunteer at a programming camp. I received three bronze medals and a gold from past Canada-Wide Science Fairs. I was also the national champion of the Fermat mathematics contest. In the future, I hope to become an astronomer or a physicist. I first became interested in Mars after the Curiosity rover landed. My project in grade 11 explored how craters on Mars could be used to determine how much water is beneath the ground. I found astronomy really fun, so I decided to dedicate my final project to Mars! This year, I explored a novel technique of using craters as natural windows into the subsurface, and investigated the geology of Mars. I would advise students to explore their passions, because science fair is definitely an opportunity to learn and to have fun!