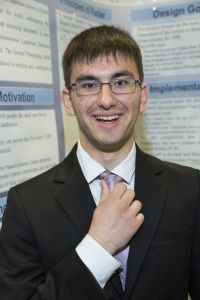 There are 110 million landmines buried at former combat sites around the world, endangering the general populace and demining personnel. A cost-effective mobile Autonomous Landmine Detection System is proposed. The Ground Penetrating Radar component was reduced to practice and confirmed to be working.

I am Aleksa Bjelogrlic, a grade ten student at Central Secondary School in London, Ontario. My goal is to study electrical engineering. I am also quite interested in the software side of things. Since my last science fair project, I dived into hobbyist electronics and even tried to integrate them with school projects. To demonstrate the kind of electronics that go into hobbyist satellites, I used a solar panel to power a text-to-speech module singing “Space Oddity” in time with the real song playing in the background. This project was inspired by a program on making your own radar system from MIT OpenCourseWare. I learned some radar theory from the program and decided to make a ground-penetrating radar that could be used by humanitarians to detect landmines. I plan to release this project as open-source and continue to make the system more compact and accessible to humanitarians. My advice for other people looking to do a science fair project is to never go into anything with assumptions about the results; it can cause you to repeat a test over and over expecting a different outcome (to go insane by Einstein’s definition).