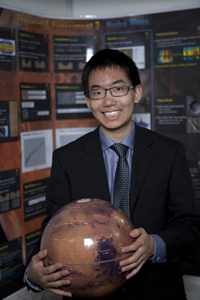 The formation of impact craters is greatly affected by the presence of water. Impact craters on Mars were investigated to create improved hydrological maps of water kilometres deep on Mars. Crater depth and floor pit size were used to create two hydrological maps. Knowledge about water kilometres deep can further our understanding of the Martian landscape and may provide intriguing clues about extraterrestrial life.

I’m a grade 11 student at Central Secondary School and I live in London, Ontario, Canada. My hobbies are swimming and chess and my favourite subjects are math, physics, and chemistry. I’m a member of several clubs in my school and was captain of programming in robotics. I volunteer at a programming camp during the summer and regularly volunteer at a concert hall. I received two bronze medals and a gold (last year) from the Canada Wide Science Fair. This year, I was the national champion of the Fermat mathematics contest. I hope to become an engineer in the future. I was inspired to do this project after the Curiosity rover landed on Mars. After doing further research, I was fascinated that water concentration could affect impact craters. In the future, I will investigate other characteristics of crater morphology, such as floor pit concentration, to determine how they change with water concentration. I would advise students thinking about doing a project to choose a topic that reflects their interests because science fair should be fun, not a chore!