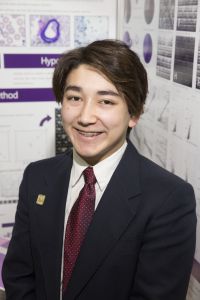 Chaos Game Representation (CGR) of DNA and frequencies (FCGR) aid in visually depicting genome sequence composition. Utilization of these tools and Spearman correlation graphs permitted the macroscopic and statistical identification of genetic similarities between 38 parasites and 49 hosts. This discovery highlights underlying co-evolutionary mechanisms in parasitology, which define the potential of new genetic approaches in effectively addressing the endemic issue of parasitic infections worldwide.

Hello! My name is Etienne Joulin and I am a grade 10 student at London Central Secondary School in London, ON. I have been playing the alto saxophone since I was ten and love performing at my local and provincial Kiwanis music festivals. Although playing in front of an audience is quite nerve-wracking, displaying the many hours put into practicing is beyond rewarding! I also have a keen interest in math and enjoy participating in the University of Waterloo’s math contests to challenge my mathematical abilities. I previously attended the 2017 CWSF in Regina and so this is my second Canada Wide Science Fair! I am so excited to explore Fredericton, meet new people, and present my findings at this year’s CWSF! My project developed after being introduced to the potential of CGR in visually depicting and comparing genomes, which could be used to identify genetic similarities between parasites and their various hosts. I hope that my research will prove valuable in reducing the global burden of parasitic infections globally. For other students interested in science, I encourage you to ask questions, regardless of how simple or complex, and if no one has an answer, then find it yourself!