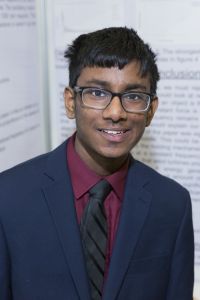 In this project, I investigate the phenomena that when a steady air stream blows on a piece of paper, it vibrates. Nothing is known about this phenomena and I hope to shed light on it by investigating the correlation between the speed of the air stream and the frequency of the vibration(vibrations/second).

My name is Kavin Satheeskumar, I am a programmer and novice, hobbyist mathematician. My inspiration for this project came from a sigh of relief. When it happened, I noticed that a piece of paper vibrated in my breath, I continued to blow and noticed that I could get consistent vibration. As I researched, I was unable to find anything on this phenomena so I decided to investigate it myself. It turns out that this simple phenomenon could present a less costly and less ecologically damaging method of producing wind energy. Further research will mainly focus on the viability of this as a method of energy generation. Moving forward, my advice for anyone wanting to do a project is that your project doesn’t have to be massive in scale to have a massive impact on the world and that real researchers have published on in depth investigation of simple phenomena.