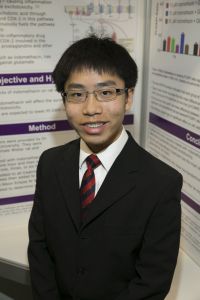 Neuroinflammation plays a significant role in the progression of neurodegenerative diseases. This project studies the neuroprotective effect of indomethacin, a nonsteroidal anti-inflammatory drug, on rat cortical embryonic neurons exposed to an inflammatory environment caused by glutamate-induced excitotoxicity. Results show that indomethacin treatment does have a positive effect in reducing cell dying rates during glutamate excitotoxicity. This protective effect only exists when excessive glutamate is present.

I am a Grade 10 student at London Central Secondary School. My interests include music, mathematics, chess, and science. I started playing piano at the age of six and have won several awards at both regional and provincial competitions. Among these achievements include a Gold medal for the top Grade 10 RCM mark in Ontario. I also learned to play the violin at school. My interest in mathematics has led me to win multiple awards in math contests. I also enjoy playing chess and have won many awards in regional chess tournaments. This year, I was also on the school Junior Reach for the Top Team. My strong passion for neuroscience helped me develop my science fair project this year. After learning that neuroinflammation is a prominent feature in neurodegenerative diseases, I discovered that certain drugs called NSAIDS may be able to treat this inflammation. This inspired the creation of my project. With my strong interest in medical sciences, I hope to pursue a career in medicine. My advice for any newcomers to the science fair is to never ignore ideas that seem too difficult. With hard work and dedication, anything can be achieved!