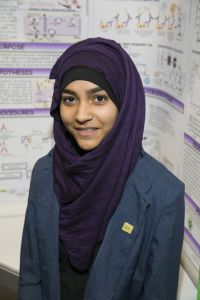 A novel class of triple functioning neurovascular medicine could be re-engineered by fusing it with monoclonal antibodies (mAb) to the transferrin receptor (TR) on the BBB. The TRmAb can act as a molecular Trojan horse to ship the fused drugs through the BBB via a receptor-mediated transport system, owing principally to the significantly improved CNS drug transport, to improve the AD phenotype.

Amal is enrolled in the enrichment program at Sir Wilfrid Laurier S.S. Amal enjoys reading, graphic designing, playing floor hockey and piano. Amal has won a few honors/awards in the Gauss Contest (twice), the Canada`s Royal Legion Speech Contest, the Thames Valley Science and Engineering Fair (multiple), and the Sanofi Merit award. Her observation about the fact that almost 99.6% of clinical trials from 2002 to 2012 aimed at reversing or preventing Alzheimer’s Disease failed, mostly owing to blood-brain barrier (BBB) penetration issues, and the fact that some antibodies and shuttle peptides exist that can be manipulated as a BBB molecular “Trojan Horse” to ferry a neurovascular medicine across the BBB using receptor mediated transport system paved the way to coin the original idea of her project.