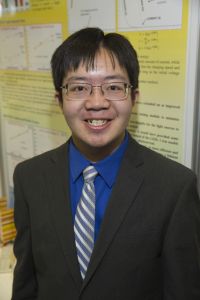 Light-emitting diodes are becoming the common means to produce light today. However, can they also generate electricity, not just save it? My project looks at possibly using LEDs to generate power. LEDS and photovoltaic cells work using the p-n junction, but in reverse of each other! If LEDs could produce electricity AND generate light, they could be an extremely flexible utility in the future.

I am David Wu, Grade 9 at London Central S.S. in London, ON. I have read almost all science books in our area’s libraries; I now go to the adult section for books that have topics I am interested in. Examples of what I have looked into include zoology, quantum physics, and medicine. Outside of that, I am in my school’s Grade 9 concert band, and I have won many solo piano competitions! I have participated in multiple chess tournaments and have won many. My first science fair was when in Grade 2; my science teacher let me participate in the 7/8 science fair at my school with a project on DNA and inheritance. I have been participating in science fairs since! My project came to be when I discovered that LEDs and solar panels work using the same principles! I conducted my experiments to see if it was possible to generate electricity, and how to optimize their power output. My advice for newcomers to the science fair is to make a project on a topic you are interested in, to follow the scientific method, and to be confident in your material!