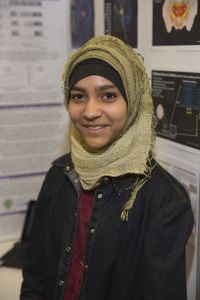 Unicellular green algae Chlamydomonas reinhardtii expresses a channelrhodopsin-2 (ChR2) cation-channel protein that controls its phototaxis movement in response to blue light. Similarly, archaeon Natronomonas pharaonis (NpHR) expresses an anion-channel protein halorhodopsin that responses to yellow light. These features of ChR2 and NpHR proteins can be used in optogenetic techniques to manipulate the bi-directional firing pattern of thalamic neurons in an attempt to treat absence epilepsy.

I am Amal Aziz. I am a 9th grade student at Sir Wilfrid Laurier S.S. I like reading books, drawing, playing volleyball, floor hockey and the piano. I have won a few honors/awards in Gauss Contest (twice), Canada’s Royal Legion Speech Contest, TVSEF Science Fairs (multiple), Sanofi Merit Award, Research Western Imagination Prize and Al-Taqwa S.S. scholarship (declined). I am also a regular participant of Let’s Talk Science, BIOlympics and the Terry Fox Run. Last year at TVSEF, through my project, I learned how scientists used optogenetics to plant false memories in experimental mice. With my passion in neuroscience, I knew that epileptic seizures result due to the ionic imbalance by ion proteins within certain neurons and Let’s Talk science helped me to learn about phototactic microbes. When I put those observations together, I came up with my current proposal, to express microbial proteins in neuronal cells using optogenetics to fix epileptic seizures. In future, I want to experiment with live animals, and humans suffering from epilepsy. Giving back to the community is my inspiration for this project. I would advise my fellow students to keep thinking of the unthinkable, one day you`ll be able to bring it into existence.