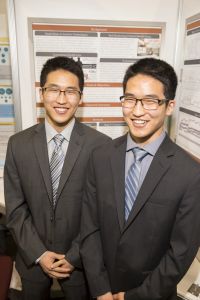 This project developed a smart bed monitoring system for use in elderly care, where the need for assistive technologies has become increasingly important. Machine learning was implemented as a novel approach to bed monitoring and was combined with simple force sensors to provide significant information and allow for detection and notification of bed related situations along with potential capabilities for diagnosis of sleep disorders.

Gary Shen is a grade 12 student attending A.B. Lucas Secondary School in London, Ontario. He has participated in science fair competitions for many years and has enjoyed the experiences he has had pursuing his interests in self-guided projects. Outside of his science fair project, Gary enjoys playing hockey on his high school and club teams. He is also involved in the student run Heart for Heart charity at his school. Gary looks forward to the challenges he will face and the opportunities that he will have in his post-secondary engineering studies.

Carl Shen is in Grade 12 at A.B. Lucas secondary school in London, Ontario. He plans to pursue a degree in computer engineering at university. He has had numerous awards and achievements at science fair and DECA competitions. He also been involved in fundraising campaigns such as Relay for Life, Scrooge for the Salvation Army and Heart for Heart. Carl enjoys playing hockey, and is a member of his school hockey team as well as with a club. Carl has been involved in science fairs for 8 years, and has enjoyed his various experiences immensely. His advice for students thinking about doing a project is to choose an enjoyable topic, and to commit to completing it before starting. Carl and his brother developed their project based on a goal of developing solutions for everyday issues, especially for independent living applications, and have developed other technologies based on this focus before, including a RFID-based object locator and a smartphone-based fall detector.